If you’re anything like me you like to read across genres. Sometimes I feel like reading a romance, sometimes a thriller or a mystery…it’s so good to have so many choices these days!

The Dry by Jane Harper was recommended to me by lots of different people. A murder in a drought ridden Australian small town wouldn’t necessarily be a go-to choice for me but it was gripping read and one I enjoyed.  The blurb:

WHO REALLY KILLED THE HADLER FAMILY?

It hasn’t rained in Kiewarra for two years. Tensions in the farming community become unbearable when three members of the Hadler family are discovered shot to death on their property. Everyone assumes Luke Hadler committed suicide after slaughtering his wife and six-year-old son.

Federal Police investigator Aaron Falk returns to his hometown for the funerals and is unwillingly drawn into the investigation. As suspicion spreads through the town, Falk is forced to confront the community that rejected him twenty years earlier. Because Falk and his childhood friend Luke Hadler shared a secret, one which Luke’s death threatens to unearth …

The overwhelming feeling I got when I read this book was of an unbearable heat– Harper has created a place that is literally choking. Pressure cooker tension in a town that is dying made worse by the absence of rain…nothing to cleanse the place of its previous misdeeds, or to help them move on from a death that happened years ago. Tempers fly, fingers are pointed easily and fists and insults used regularly. 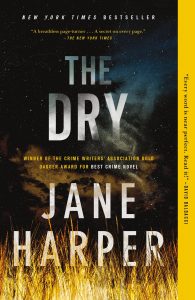 When police investigator Aaron Falk goes ‘home’ for the funeral of his old friend he is asked to stay on and help uncover the truth of the senseless deaths of his friend, wife and child. Old wounds are peeled open and Aaron is reluctant to stay, but something about the case makes him think it wasn’t a murder/suicide after all. So he agrees to help the new police officer and forms an uneasy friendship and working relationship.

But there are many who would rather Aaron left town again, as he did years ago, and staying lays Aaron open to abuse, threats and accusations. Old memories resurface, alongside the unsolved death of his almost-girlfriend twenty years ago. All fingers point to Aaron as the perpetrator and soon he is trying to solve a recent crime and clear his name at the same time.

Harper has a talent for twists and turns in the plot and I found myself guessing (wrongly!) over and again as to who had killed these innocents. She takes the reader down many paths, and eventually they all lead to uncovering the identity of the killer. But The Dry is more than a whodunnit, it’s a rollercoaster of emotions reminding us of the complexities of life and the difficulties of existing in a place where nature is stacked against us.

The Dry is available from all good bookstores and e-retailers.