I am so excited to announce that Something Secret, book 4 in the Something Borrowed series is available for pre-order and will be out on 21st September!!

I love this book! It’s about friendship, secrets, the things we do to protect ourselves. It’s about love. Family. The things we all hold dear. But what happens when your loyalties are torn? Sometimes we do things with good intentions, but they back fire and people get hurt. So we try to make it better. Sometimes we can’t. Sometimes things turn out well in the end.

These were the themes running through my head when I wrote Something Secret. But it is also peppered with my trademark humour and a little bit of heat 😉

It’s in the series, but it’s also a standalone story which means if you’re new to me you don’t have to have read all the other books in the series to understand this one.

After being scammed by her own boyfriend Katriona Croft is big on honesty and loyalty. No way will she ever fall again for some two-bit scammer with a pretty face. But when Gabe Cassidy arrives in Portobello with a story about secrets and lies, and touting the sexiest smile she’s ever seen, all her resolve is blown apart and her loyalty to her best friend is sorely tested.

All his life Gabe’s mantra has been that being alone is better than being broken. But when he overhears a conversation in a pub his life is tipped upside down and instead of being alone he finds himself very much in the middle of a big family feud. Kat Croft seems to be the key to fixing it all, but any alone time with her makes things even more complicated…

But can Gabe convince the woman who has lost all trust to take a chance on sharing a whole lot more than secrets?

The eagle-eyed amongst you who have read books 1 and 2 in the series will notice that Gabe’s surname is Cassidy… can you join the dots? He he he he….. 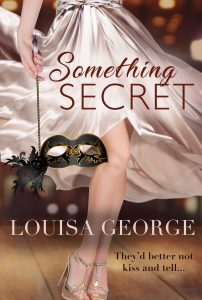