Well, the reading challenge hasn’t exactly gone to plan. Let me remind you- January was for RITA judging books. February was for autobiography, March was Science and Technology, April is for graphic novels and comics.

So…. I received 7 RITA books and, to make sure I did them all justice and completed each one, having read it thoroughly, it took me through February and into March!! The judging deadline was 6th and I scraped through just in time. Which means February was a washout for the reading challenge. 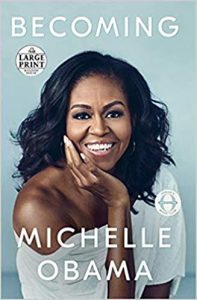 I started Becoming by Michelle Obama as soon as I completed the RITA commitments and I am only just about to complete it! It seemed to take me a long time to read and I’m not sure why…yes, it’s a long book at 426 pages but I can often whizz through long fiction. I guess the subject matter is hardly ‘seat-of-the-pants’ and I do know what happened in the end!! But I am  enthralled by her writing style (I wonder if she had help or if that’s her natural voice?) and it is fascinating learning about her life.

Michelle grew up in South Side, Chicago into a close-knit family, she sounds like she was a little ‘princess’ whereby she had to have everything neatly just-so and organised, she’s a great list-maker! She has an older brother and they had a fairly regular upbringing. What I loved was her determination to succeed in whatever field she decided to work in and she had a variety of roles from lawyer to hospital administrator and then, of course, First Lady. When I was reading the parts about her childhood I have to admit I was eager to get to the parts about her relationship with Obama (I am a romance author after all!) and then what it was like to live in the White House, but now knowing about her drive and her sort of OCD tendencies I can see that being FLOTUS would have been enormously challenging for her–she had little control over her daily diary and knew that whatever projects she took on would be scrutinised and that she would be held to a much higher standard than anyone else. It was fascinating to see what was expected of her and how she rose to the challenges but always put her girls in the centre of her decision-making (as far as she could!).

I’m not going to rate the books in this challenge as that’s not what it was about. I enjoyed learning about her and it was very well written (plus, pictures!!!).

Onto the next one…I’ve picked a shorter one for Science and Technology so hopefully it won’t take me as long to read!